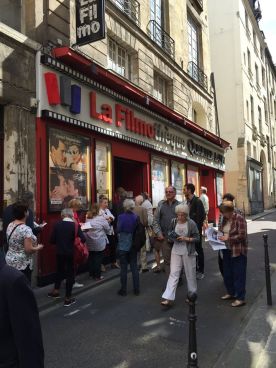 Last Post from Paris  2016– Saw my 11th movie at one of the great old cinemas around town (Magnificent Obsession with Rock Hudson and Jane Wyman 1955). I also saw Casablanca in a 50-seat theatre where it probably premiered as a new release in 1942. Said goodbye to my favorite ice cream lady who I saw everyday. She would see me coming and have my cone of Caramel Beurre Salé ready for me. I had a 17 € Martini at the Hemingway Bar in the Ritz. It comes with a rose — that must be justification for the price. My friend Holly and I had tea at the Mosque de Paris. I found my favorite Paris park statute — a lord amused by a crow feeding bread to a fox (which is one of Aesop’s Fables.)